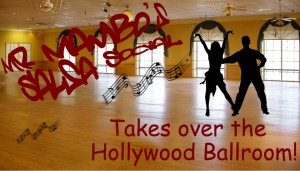 I‘ve lived here in DC for almost four years. I’ve been dancing here for almost three of those years. So the question is why, Why, WHY in the HELL have I NEVER made it out to a Mr. Mambo’s Salsa Social?!

Mr. Mambo’s 1st and 3rd Saturday event was originally housed at the DC Dance Collective in upper Northwest DC. A nice, intimate studio which I frequented for classes. They’ve just recently moved to the Hollywood Ballroom in northern Silver Spring, Maryland. The differences between the two venues? Hollywood is much bigger although not very Metro accessible with it being in the burbs.

I never made it to a social for numerous reasons. The majority of them were excuses which I threw out the window last night. Yes folks, I finally made it out for a night of dancing and laughing with a bunch of awesome people! My fear of not getting home? Not an issue. I had a few people who would be the most generous sweethearts by taking me to the Metro station downtown. I had cab money if they bailed out so I wasn’t worried.

I will admit that I will not be attending these socials religiously while I am still without a vehicle. Even though I CAN get there it’s still a two hour bus ride. Plus, I fear the cab fare downtown to the Metro will be about $20. That cuts too much into my Salsa funds. If they look into shuttle services…nah. That may be a little too much for them as well. So maybe a once every few months outing depending on the type of party they are throwing. Maybe. Knowing me I’ll find a way to go every single time! Lol.

A big THANK YOU to the crew that brings us these socials two times every month (with a party squeezed in every now and then). You can find them at salsalovesmambo.com on the web and on Facebook here. Dance on, my friends…dance on!