It was a beautiful Sunday afternoon. I was waiting on a friend before we made our way to the Newseum in DC. That’s when I saw the ruckus on Facebook. Apparently there was a new Erykah Badu video out. Some folks seemed to not like it. I went to see what all the fuss was about. 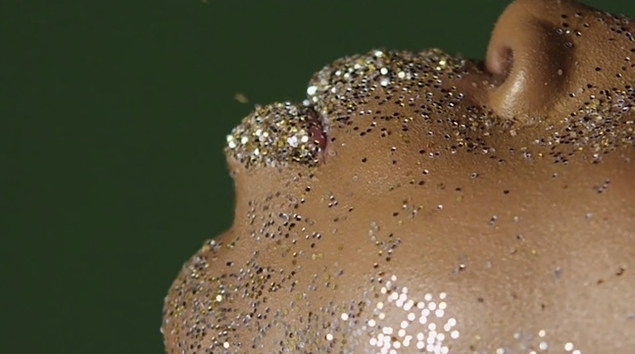 That’s all I could think. I really didn’t have an opinion about the video. No positive or negative feelings towards it. I was more confused then anything. I didn’t have an issue with the video at all. I love the abstract and all things far out there. My taste in art is…unique. I just didn’t get this.

The issue of demoralizing black women came up multiple times. Only thinking of us as sex things. People (other black women) upset that yet again a black woman is de-robbing herself to express herself. Folks were so upset that the video has been pulled from almost everywhere on the interwebs. You may still be able to find it on World Star Hip Hop. Maybe.

All in all, not many happy campers. Including Ms Badu herself. Her Twitter response to the lead singer of The Flaming Lips concerning the video:

@waynecoyne then… perhaps, next time u get an occasion to work with an artist who respects your mind/art, you should send at least a ROUGh version of the video u PLAN to release b4 u manipulate or compromise the artist’s brand by desperately releasing a poor excuse for shock and nudity that sends a convoluted message that passes as art( to some).
Even with Window Seat there was a method and thought process involved. I have not one need for publicity . I just love artistic dialogue . And just because an image is shocking does not make it art.
You obviously have a misconception of who I am artistically. I don’t mind that but…
By the way you are an ass.
Yu did everything wrong from the on set .
First:
You showed me a concept of beautiful tasteful imagery( by way of vid text messages) .
I trusted that. I was mistaken.
Then u release an unedited, unapproved version within the next few days.
That all spells 1 thing ,
Self Serving .
When asked what the concept
meant after u explained it , u replied ,”it doesn’t mean anything , I just want to make a great video that everyone is going to watch. ”
I understood , because as an artist we all desire that. But we don’t all do it at another artist’s expense .
I attempted to resolve this respectfully by having conversations with u after the release but that too proved to be a poor excuse for art.
From jump,
You begged me to sit in a tub of that other shit and I said naw. I refused to sit in any liquid that was not water. But Out of RESPECT for you and the artist you ‘appear’ to be, I Didn’t wanna kill your concept , wanted u to at least get it out of your head . After all, u spent your dough on studio , trip to Dallas etc.. Sooo, I invited Nayrok , my lil sis and artist, who is much more liberal, to be subject of those other disturbing (to me ) scenes . I told u from jump that I believed your concept to be disturbing. But would give your edit a chance.
You then said u would take my shots ( in clear water/ fully covered parts -seemed harmless enough) and Nayrok’s part ( which I was not present for but saw the photos and a sample scene of cornstarch dripping ) and edit them together along with cosmic, green screen images ( which no one saw) then would show me the edit.
Instead, U disrespected me by releasing pics and rough vid on the internet without my approval. (Contract breech )
That is equivalent to putting out a security camera’s images of me changing in the fitting room.
I never would have approved that tasteless, meaningless, shock motivated video .
Our art is a reflection of who we are . I have no connection to those images shot in their raw version. I was interested in seeing an amazing edit that would perhaps change or alter my thoughts . Never happened .
You also did the same thing with the song itself which displays crappy “rough “vocals by me . I let it go , perhaps iiiii was missing something, I thought.
I Should have followed my first mind back in studio when recording the vocals “your way”.
( Red flag.) It was uncomfortable.
For that I am at fault .
Consequently, brother, As a human I am disgusted with your what appears to be desperation and poor execution. And disregard for others . As a director I am unimpressed . As a sociologist I understand your type. As your fellow artist I am uninspired. As a woman I feel violated and underestimated.
Hope it works out for ya ,Wayne.
Really i could give a shit less.
Still love your live show tho.
And , you’re welcomed.
Lesson learned .
By the way I have guested in very few videos. But I have always been given the opportunity to see the edit and contribute to it when my roll is substantial. Not this time .
I guess u feel it better to apologize than ask for permission and be refused . Hey, Love u man, but your ways are not very nice .
O, And on behalf of all the artists u have manipulated or plan to manipulate, find another way .
These things have been said out of necessity.
And if you don’t like it
you can KiSS MY Glittery ASS .
O and Nayrok told me to tell u to kiss her ass too .
Almost forgot.
Peace

Mr Coyne eventually released a statement of his own concerning the video. 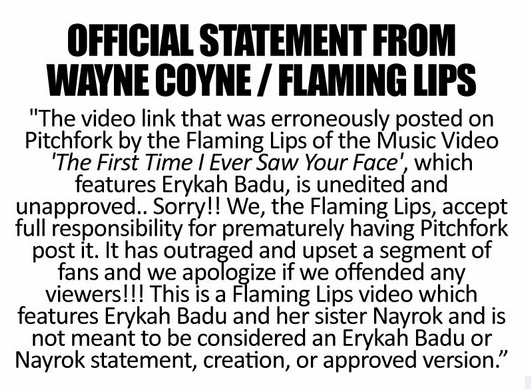 In response to Erykah’s Twitter message? Well. A pic of him with some glittery lips. The man obviously does what he’s told. Lol.

If you’d like you can follow both Erykah and Wayne on Twitter. I’m sure this will still be a topic of conversation for a bit longer.

So, did you get a chance to see the video? What did you think of it?