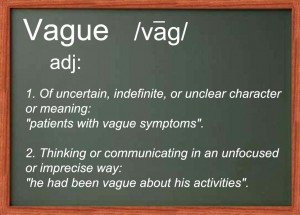 I had a conversation with an old friend Friday night. I hadn’t spoken to this gentleman in quite a while. The time was there so we caught up briefly before we both moved on to our next activity – his = drinking and mine = sleep. He compared me to a female that he knows out in his neck of the woods saying that “she’s just as vague as you are.”

I’ve always been the type to not offer up any kind of information freely. The only time you’d get it from me is if you asked me a direct question. Even then it’s not guaranteed. I can just as easily say that it’s none of your business and move it along. Lol.

It had been a very long while since someone had referred to me as being vague. I was a bit taken aback. Reason being because I believed that I had worked at opening up a bit more. Not telling ALL of my business, mind you. Just being open in general. A bit more approachable. A bit more conversational.

My friend acknowledged that I may have improved on that little shortcoming of mine. It HAS been a while since we’ve talked and even longer since we’ve seen each other. The last time I saw him was the summer of 2006. Last time I had an in depth phone conversation with him was sometime in the beginning of last year, I believe? Not sure.

There are times that I am still pretty vague. It’s still part of my nature. Steps are still being taken to work on that. As long as I’m not blurting out all of my secrets then it’s all good. Lol.

Know anyone that’s vague? How about you? Can you consider yourself being vague in certain situations?